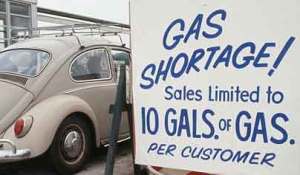 In 1976, my school teacher said the world was past Peak Oil.  She said I would never obtain a drivers license, because no cars would exist.  Petroleum would be too scarce.

The world was ending!

So I gathered all my money from delivering newspapers.  I invested it all in bicycle parts and repair tools.  I bought wrenches, a wheel spoke tightener, a chain repair kit, and a pile of spare parts.  I hoarded.  I prepared for the world collapse.

But we found more dead dinosaurs.  We have burned gazillions of barrels since then. And the known reserves are far greater today than in 1976.  We were saved by a MIRACLE.

The world today is messed up.  Almost every developed country is insolvent. Governments falsify statistics to justify more invasive policies.  The foundations of ethics and morality are crumbling.  A cycle of violence might be starting, similar to the one that started early in the 20th century.  The world is ending!  Again.

I choose to believe in miracles, because I have seen them so many times.  I believe that if we are good and wise, another miracle will rescue us.  I choose optimism over gloom.

Brock has helped many people to be extremely successful. He has lived in various countries and has enjoyed several careers, but is now a writer and a career coach. He sustained mild lead poisoning as a child, resulting in neurological damage. The result was a life of learning disabilities, always struggling to keep up. But he completed two degrees from competitive universities, then advised Wall Street executives in Asia for 15 years. He later earned a PhD and worked as a university professor for six years. He has started three profitable companies in between. So he particularly wants to help those with special learning challenges. Because so many of us now have these special challenges, they are no longer special. But they are challenges. He wants you to TEACH YOURSELF how to be successful. View more posts